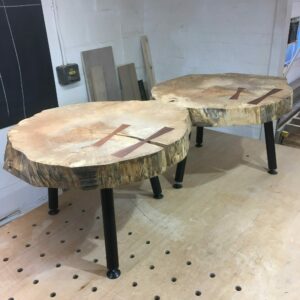 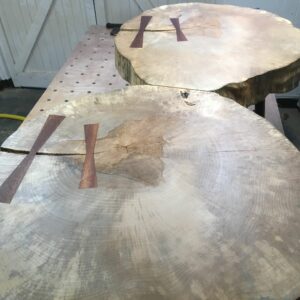 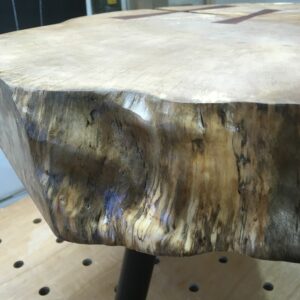 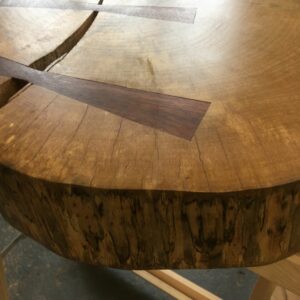 These two coffee tables were formed from a couple of slabs that I milled from the stump of a Sycamore felled to allow development of a local hotel. To be honest I didn’t have a lot of confidence in anything coming from them. Rounds like this always split and it was impossible to get them properly covered or weighted down where they were to be stored but we gave it a go. I am so glad we did. Once they were levelled some fantastic spalting was revealed as well as some signs of a bit of rot in the heart wood that was just starting at the base of the tree. I set some Iroko butterfly joints in, just to make sure the split goes no further and sanded the tops and sides down then applied our go to hard wax and voila two fantastic table tops.

I matched them with some splayed tubular steel legs set straight into the tops, added some industrial feet and a matt black finish. I think these are nice update on the mid-century dansette type legs. They are also really solid which is good new as these slabs are over 700mm in diameter and some 75mm thick so they are pretty weighty.

So now we don’t write off collecting rounds when we are out milling, but they do have to be pretty carefully selected and properly milled.