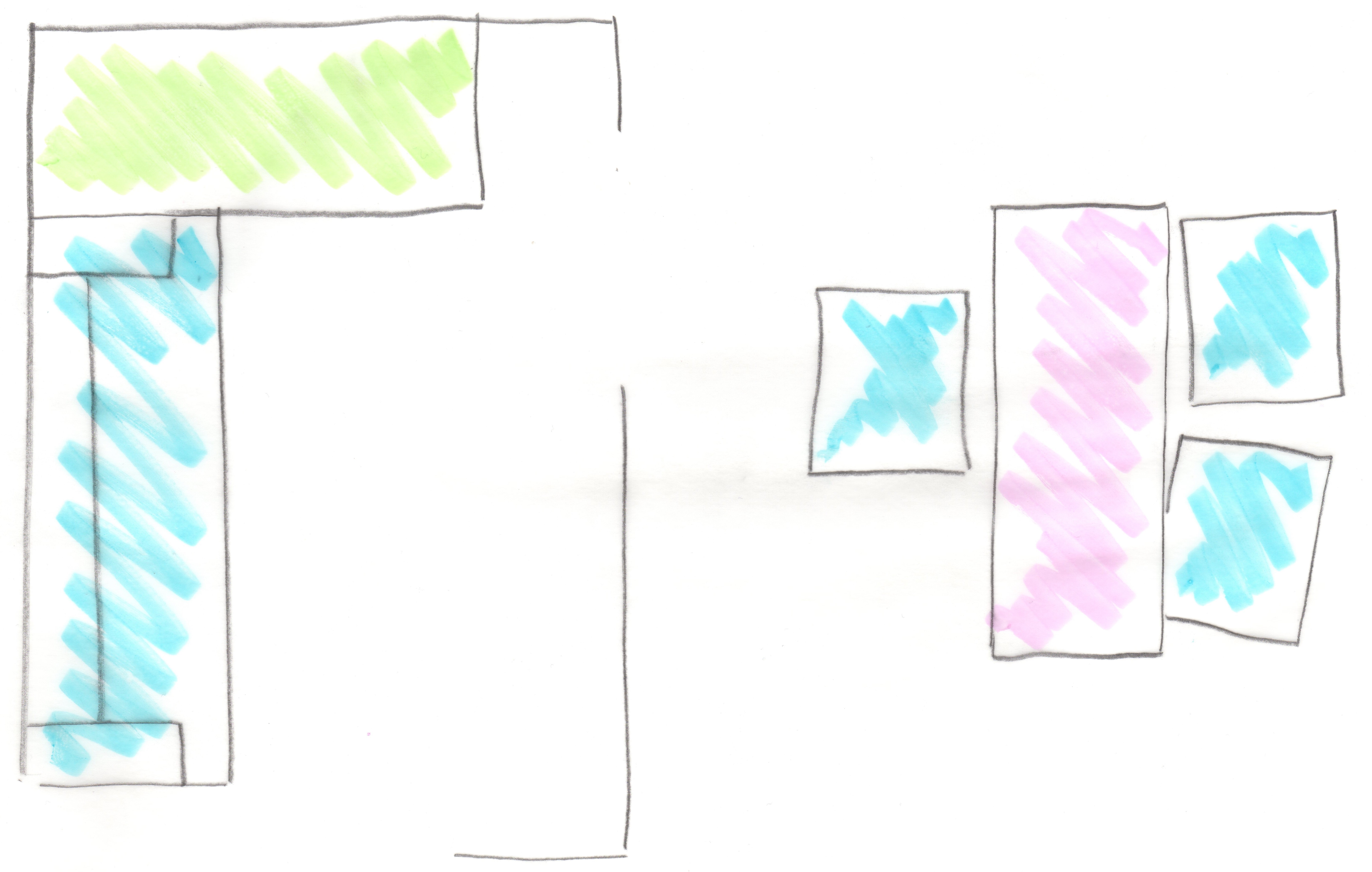 Having used it a fair bit, I think the overall layout of the bus works pretty well. I would rather not emerge from the shower into the kitchen area but that is relatively minor. The main design challenge is to get a family of four or four adults to be able to sleep, eat, chill, watch a bit of telly and generally ‘be’ in the main living area at the back of the bus. This area also has to accommodate the fresh water tank, the hot water boiler and the water pump as well as providing access to the leisure batteries (under the floor, slap bang in the middle). They could all be moved but there would need to be a real benefit in terms of design to make the effort and cost worthwhile. The other big constraint is in the form of the wheelchair access lift. I don’t propose bringing this back into use but the door does provide a sort of Juliet balcony effect so I would prefer to keep it clear. 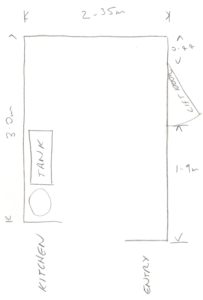 The tank’s location in the sketch is a bit approximate and ‘entry’ is the main entry on to the bus. It is also worth remembering that Ivy is pretty tall so ceiling height is about 2.00m at the perimeter. Even I can stand up properly in there.

I started by considering a few key dimensions e.g.

I went for the old cut out shapes method of design, moving blocks around to see what could go where, I had blocks for all the above and for a table. In the new world of design thinking this is apparently called ‘Ideating’. Horrible isn’t it? Anyway, I ideated my socks off and came up with a few layouts that could work. (It could also probably be called ‘protoyping’ in design think speak as drawing seems to fall in to that category.)

I tested these layouts against a few criteria.

There were others but these seemed a pretty core list.

The first thing that was completely clear was that it does not all fit. No great surprise, so immediately we need to think multi-storey.  As with most design, some bits tend to harden up pretty quickly, the sofa being over the water tank seems natural. The sofa seems an obvious half a bed. The remaining space on that wall is about the width of a bunk. The opposite wall is about a bed length, etc. 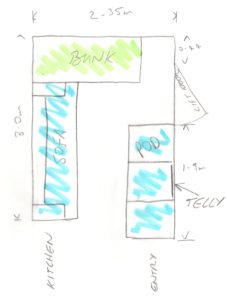 The lower bunk will have sliding doors so that the head end can be at either end and opened up or closed during the day to separate the space from the living area. The top bunk will be open but with a bit of a lip for safety reasons and again to provide separation from the living area. The TV will be mounted on the wall within a low profile cabinet. The pods are free standing cuboids with a hinged lid. The inside provides storage while the padding on top is the same depth as the sofa’s. One side is 1900mm/3 long so that they fit along the TV wall. The other is one third of the width of the sofa, coincidentally the width of a bunk mattress. So as they are configured above they can form a single bed, as does the sofa (the arm cushions fit in a pod the other goes at the end of the bunks). The pods do not have to be neatly lined up they could be extensions to the sofa or dotted about for watching telly. You could even take one up to the cab end of the bus to sit on whilst chatting with someone in the kitchen. Alternatively… 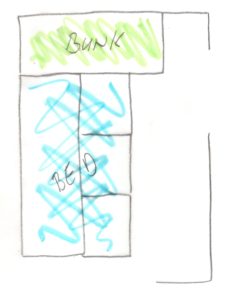 Placing all three pods alongside the sofa gives a more than double size bed and enough room to walk around it to the bunks. So that seems to take care of sleeping and lounging.

I have tried a number of solutions for tables based upon things that fold and hinge and slide but I started to realise I was mainly doing this because I think that is what motorhome tables do. Maybe I needed to go back to something a bit less complex. So I intend to build a simple trestle table with one slightly unusual feature insomuch as it will have an I section leg (a description that only really works if you are reading this in a serif font but you get my drift). I like this pattern as it lets people wiggle in and out past the table without a leg in the way. With the pods rearranged, dinner could look like this. 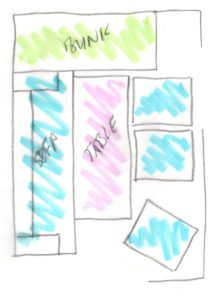 The table would fold up and be stored between the passenger seat and the wardrobe at the front of the bus in a nice solid mount.

I like the idea that the bus could be a live/work space. It could earn its keep as an office when at home or allow holidays to be longer by allowing you to work from home a little whilst on the road. As the TV could easily be used as a monitor why not use the table as a desk? One pod is stored under the table (maybe it has your work gear in it). The other becomes a foot stool / extension to the sofa. 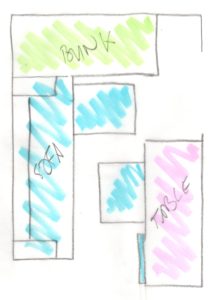 In fact why not go the whole hog? Maybe work or eat outside? 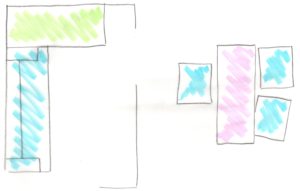 So there we have it. There is obviously a lot more detailed design to do and I need to work through the concepts for the shower/wardrobe and kitchen but we are on our way. At last some building can commence!